The Devouring by Simon Holt 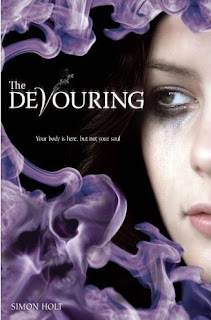 “When dark creeps in and eats the light, bury your fears on Sorry Night. For in the winter’s blackest hours, comes the feassting of the Vours. No one can see it, the life they stole. Your body’s here, but not your soul…”

Reggie has always been a fan of the gothic, the supernatural, the horrific. One day, while working at the local bookstore, she comes across a book called The Devouring and, thinking it’s just another horror novel, takes it home. As Reggie and her best friend, Aaron, peruse the book, they discover the world of the Vours, demonic creatures who possess humans by preying off of fear. For Reggie and Aaron, it’s all just fun and games, until Reggie’s little brother, Henry, starts exhibiting strange behavior. Then, bad things start happening. Henry’s babysitter turns up dead, and Reggie finds Henry’s pet hamster in the toilet with a broken neck. Henry begins lying to their father, getting Reggie in trouble for things she didn’t do. When Reggie starts experiencing fear-induced hallucinations, she begins to wonder if the Vours really are just storybook monsters after all. The Devouring is a compelling young adult thriller that focuses on the element of fear. Even though the Vours are fictional beings, I found it easy to relate to the fear described in the book, mainly because fear is a natural reaction that all of us, as humans, experience at one time or another. In addition, The Devouring doesn’t just focus on supernatural issues, but normal, teenage problems that the characters face as well. The book was very well-written and suspenseful, and kept me turning pages the entire time. Be warned though, it does end with a cliffhanger, leading into Holt’s second book in the series, The Soulstice.
4 Stars!
Posted by A Book Adventure at 10:34 PM