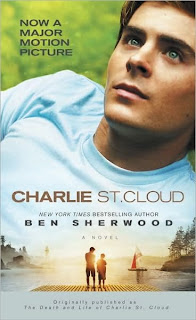 “In a snug New England fishing village, Charlie St. Cloud tends the lawns and monuments of an ancient cemetery where his younger brother, Sam, is buried. After surviving the car accident that claimed his brother’s life, Charlie is graced with an extraordinary gift: He can see, talk to, and even play catch with Sam’s spirit. Into this magical world comes Tess Carroll, a captivating woman training for a solo sailing trip around the globe. Fate steers her boat into a treacherous storm that propels her into Charlie’s life. Their beautiful and uncommon connection leads to a race against time and a choice between death and life, between the past and the future, between holding on and letting go—and the discovery that miracles can happen if we simply open our hearts.”

I just finished this book last night and it was phenomenal. Charlie St. Cloud is a character that I will remember for the rest of my days. Charlie can only be described as devoted and I was a devoted reader until the very last page. This is no book about romance. This is a book about love, romantic and brotherly.

The film adaptation of this book stars Zac Efron and was filmed in Vancouver, British Columbia. Before or after seeing the movie, I urge you to read the book. It is more in depth, more captivating and something more tangible than any film could be. Thank you, Ben Sherwood, for writing a novel that has filled my heart with hope.