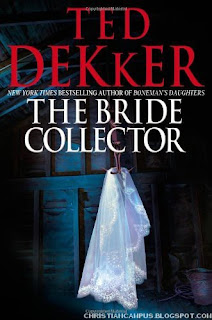 Brad Raines is an FBI special agent who tends to end up with very complex and gruesome murder cases. In this instance, he's responsible for someone who is abducting women, gluing their naked bodies to the wall, placing a wedding veil on their heads, and letting them bleed out through two holes drilled in their heels. Definitely not your run-of-the-mill murderer... The killer's pace is accelerating, and he's not leaving anything behind in the way of forensic evidence that can be used to track him down. It's only once he starts leaving notes behind for Raines that there's any sort of trail to follow. And the trail is quite warped. He is presenting these women to God, and is working up to his perfect offering. In desperation, Raines turns to a patient who is living in an institution for the mentally ill. She is supposedly able to touch a body and see the event that killed the person. Raines isn't all that open to the possibility, but he has little else to go on. And when events start getting extremely personal and close to home, Raines is forced to confront his own demons along with those of others in order to stop the killer and save the ones he loves.
The way the story is structured, you know who the murderer is right off. The story bounces back and forth between the killer and Raines, so the payoff isn't the "who dun it" resolution at the end. Instead, it's more along the lines of seeing whether Raines will be able to stop him before he can claim his final victim. Dekker also touches on issues such as the mentally ill, spirituality, abuse, and a few other themes that will allow the reader to ponder such topics if they so choose. In the middle of the story, things slow down a bit, and it seems as if we're just killing time before the end game comes into play. I also felt as if some of the characters, especially Nikki Holden, were less developed than I would have expected. It may be that this isn't the first novel with the Raines character, in which case I could understand it. But I still felt as if I was missing something in terms of the depth of some of the people.
I'd have no problems heading over to the library and starting to catch up on some prior Dekker novels. The Bride Collector was worth reading, and if his other novels are as good as this one, I'd enjoy them.
Posted by A Book Adventure at 1:11 PM