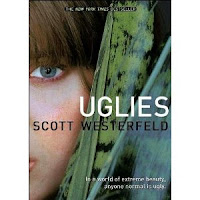 In this futuristic world, when you turn 16, you get an operation that turns you beautiful. Everyone pretty gets a new house in the glamorous part of town-New Pretty Town. This is where Tally Youngblood wants to be. How can she help it, when all anyone learns in school is how much better life is when everyone is beautiful, and when all the people you know don't call you by your name, they call you by your main imperfection? Tally's best friend Peris has just turned pretty,too. After a daring escape into New Pretty Town(no Uglies allowed-after all, why would the plastic -surgeoned people want to look at a real face?) she meets Shay, who shares Tally's birthday. This means neither will have to leave the other for a single day while she becomes pretty,which makes Tally happy. But Shay is a little unusual. She hates the operation, and wants to keep her own face. Despite tally's protests she runs away to a mysterious place called The Smoke, where runaways can be safe, and stay ugly forever. Repulsive, at least to Tally, who Shay begs to come. But she won't. In just a few days, it's Tally's birthday, her ticket out of the Ugly dorm and gazing out the window at New Pretty Town. She'll be a Pretty. Then, on the long-awaited day there's a problem with Tally's operation. A barely believed group called the Special Circumstances takes the reins, giving Tally the worst choice she can imagine: find Shay and turn her in, or never turn pretty at all. And Tally wants to be pretty so much... I could not put this book down. It's not pure unbelievability like some sci-fi, giving good reasons for why society is like this, but it's not boring either, fraught with hoverboard chases and things exploding. I'm totally hooked on the trilogy, and will definitely be reading more of Scott Westerfeld's books in the future. 5 STARS!
Posted by A Book Adventure at 4:54 PM